Sign Up for Our Newsletter!
Cart (0)
See More: Coats
Previous / Next


NOTE:
Measurements are taken seam to seam while item is lying flat.  Double measurement for Chest, Wrist, Waist, Hip and Across Bottom. 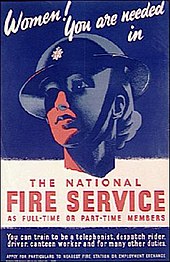 The NFS was created in August 1941 by the amalgamation of the wartime national Auxiliary Fire Service (AFS) and the local authority fire brigades (about 1,600 of them). It existed until 1948, when it was again split by the Fire Services Act 1947, with fire services reverting to local authority control, although this time there were far fewer brigades, with only one per county and county borough.

The NFS had full-time and part-time members, male and female. Its uniform was the traditional dark blue double-breasted tunic, and it adopted the peaked cap worn by the AFS instead of the peakless sailor style cap which had been worn by many pre-war fire brigades (including the London Fire Brigade). The peaked cap was retained by fire services after the war.

When they were on duty, but in the frequent long stretches between calls, many firemen and firewomen performed vital wartime manufacturing work, in workshops in the fire stations or adjacent to them. This was entirely voluntary, but since many of the wartime personnel had worked in factories before the war it was work with which they were familiar and skilled.

War service meant considerable risk, and members of the NFS were called to attend the aftermath of German bombing raids and coastal shelling from France, or often whilst these attacks were still ongoing. Casualties were inevitable, and there is one record of one volunteer who died on duty aged just 19, and was awarded the Certificate for Gallantry as a result.[2] He is buried in the Hamilton Road Cemetarym Deal, Kent.

The Chief of the Fire Staff and Inspector-in-Chief throughout the war (until 28 February 1947, when he retired) was Sir Aylmer Firebrace, former Chief Officer of the London Fire Brigade.

At peak strength the NFS had 370,000 personnel, including 80,000 women.[3] The women were mostly employed on administrative duties.

The NFS was divided into about forty Fire Forces. These were subdivided into Divisions. Each Division had two Columns and each Column had five Companies.

Email Us About This Product
(Include Product Name in Subject Line)